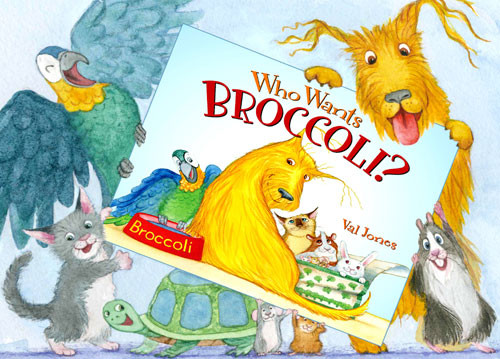 Broccoli is a big, lovable dog who likes to show off his bowl-tossing and tail-chasing skills — and especially his great big BARK!

Broccoli lives at Beezley’s Animal Shelter and has dreamed of being picked as someone’s perfect pet for a very long time. He loves to show off his talents in hopes of gaining attention, but his antics only get Broccoli a timeout in the storeroom. Finally a boy named Oscar comes to Beezley’s looking for a big, fun dog – but Broccoli is not in the shelter! How will Broccoli ever get picked?

Read a guest post I wrote for the Two Writing Teachers blog about my path to publication. 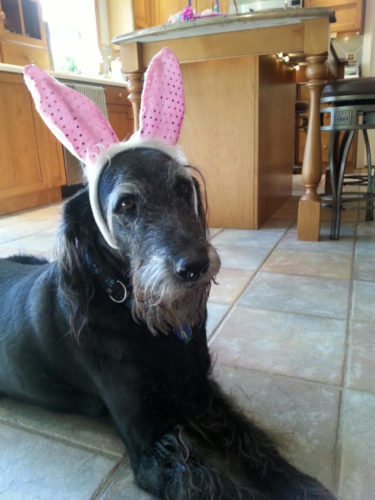 My adorable Fergus was the inspiration for Broccoli.

School Library Journal – “Broccoli is a big, boisterous dog at Beezley’s Animal Shelter. Despite his best efforts to show off by catching his bowl on his head, chasing his tail around, and barking loudly, he has never been picked as a “perfect pet.” When he sees that a boy playing with a ball has moved in across the street, Broccoli’s excited, gregarious antics lead Mr. Beezley to move his cage into the storeroom. This means that Oscar doesn’t see Broccoli when he visits the shelter, and he is not interested in the small, well-behaved animals that Mrs. Beezley offers. Luckily, Oscar leaves his ball behind and when he returns, Broccoli uses his loud bark to save the day and Oscar finds his “perfect pet.” The watercolor and pencil illustrations are bright and lighthearted. Some pages are fully covered and others employ a generous amount of white space, but there are opportunities to find humorous details in many scenes. Broccoli’s over-the-top behaviors are likely to elicit giggles, and Mrs. Beezley’s message that “there’s a lid for every pot and a pot for every lid” could promote discussions around pet ownership, acceptance, family, and friendship. VERDICT: A cute and quick pet story recommended for additional purchase.”

Kirkus Reviews – “The tricks that make a dog unadoptable in some people’s eyes are just the ticket home for Broccoli. Broccoli’s lived at Beezley’s Animal Shelter for most of his life, alongside fluffy and adorable bunnies, hamsters, and kittens, all under the care of the kind, elderly Beezleys. Mrs. Beezley lovingly brushes each animal before opening, pronouncing, “There’s a lid for every pot and a pot for every lid.” But Mr. Beezley isn’t so sure about the lid for messy Broccoli’s pot. The dog’s tricks include tossing his water-filled dish in the air and catching it on his head, playing high-speed games of chase with his tail, and giving “warnings” with his deep and large bark. When he soaks the entire shop, Mr. Beezley puts him in the storeroom…but will the pot that is Broccoli and the lid that is the little boy longing for a dog miss each other because of this? The despondent dog finally rallies when he spies the little boy’s lost ball on a storeroom shelf. His antics get both him and the ball noticed, and Broccoli’s finally found his lid (in more ways than one). Jones nicely builds suspense, and readers will be rooting for the dog by the end…Readers longing for a lid to their own pots, or with similarly challenging behaviors, will find comfort in Broccoli’s tale.”

“Whoopeee! I have been eagerly awaiting the release of Val Jones’s first picture book, Who Wants Broccoli? so I could share it with you! Isn’t that a great title? Not only is Val’s story fun and clever, but it has a dual purpose. She wants everyone to consider rescuing a dog or other pet from a shelter, especially pets like Broccoli whose age or quirks make them a challenge for some families.”—Joanne Robert, Bookish Ambition blog